Eternity of the Memory – an Exhibition at the Gallary

Hi. I’m Yuta Ikeda.  Last week, we exhibited testimonies of hibakushas at a gallary in our campus.  I’m going to write about it.

Thanks to Shinpei Takeda, a director of the film “HIROSHIMA NAGASAKI DOWNLOAD”, we watched the videos of interview to a hibakusha, conducted by him.  We made a script from the interview, writing down one word to another onto manuscript paper.  We discussed how to exhibit testimonies, advised by Mr. Takeda.  After some discussions, we decided to cover all the wall with lots of manuscript papers, to design the background by manuscript papers themselves, and to make six works of art expressing what we were inspired.  (Please have a look at photos.) 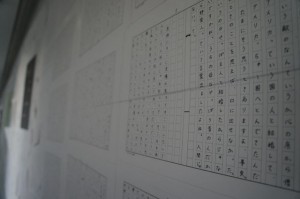 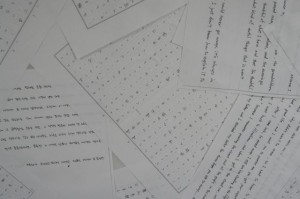 Now I’ll introduce a work by our group, one of the six groups.  As you see in the photo below, we drew a phrase “To think about the Abomb, the first thing I remember is the scene of the brother and his sister. Then I can’t say any more. I always pray for them that they rest happily in the heaven. I saw tens and hundreds of suffering people, but I especially remember the boy picking up retten noodle, not eating it himself but having his sister eat.” in a shape of an infinity sign.  We tried to express that each one has something that is not forgotten but remains in one’s heart.  The speaker seems to be living a completely new life, but he has such a feeling that lasts silently at the bottom of his heart.  It repeats, being recalled from time to time. 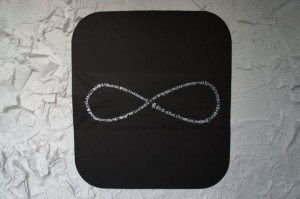 What I think is important in conveying the memory is, to express “us presently facing to the memory of hibakusha”.  We should input something by hibakusha’s memory, digest them, and output not directly what we input but actively adding what we interpreted, in some case.

The difficulties of world peace(Yasuaki Otake)

Hi! I’m Yasuaki Otake. Last Tuesday, Mr. Takeda(from ministry of foreign affairs) came to our seminar and taught us about “disarmament education”. That was very fantastic and after listening to his talk, two questions occurred to me.

First, ”The negotiations among countries for disarmament will actually lead to world peace? ”

Related to this matter, Mr. Takeda said ”Today, the activities for disarmament are taken all over the world. However, it’s not sure that the disarmament leads to world peace”. And in my opinion, even if many countries disarm, it will not always lead to world peace. It is sure that disarmament seems to be fantastic for people today, but there are not only countries but also many other organizations (like NGO,UN and so on ) which act as the subjects in the world. And the country can’t always control the people in that country. Also, the country can’t always control the whereabouts of weapons cut. Then, after the disarmament, many subjects (including terrorists) may have a mighty military strength and the might of the country may fall down, moreover that may arouse people’s anxiety.
So, that’s why I think so.

Second question is as follows, “About disarmament conference, there is a common humanity?”

Mr. Takeda said, “When we negotiate other countries, we often appeal to the heart of the other party.” However, about the negotiation of disarmament, is it possible? For example, there are many countries which are about to start the war against the next countries, or there are many countries which regard the revenge or the holy war as the humanity. Can we persuade such countries to throw away their weapons? I think it is difficult to appeal to the heart of those who have other senses of values.

Anyway, his talking was very interesting and I got interested in the Ministry of Foreign Affairs. Thank you for your reading.

As Mirai wrote here, We were lucky to listen to Mr. Takeda on Tuesday.  I’ll write two points which impressed me.

First, the Japanese government is now trying to systemize a lot of activities of NGOs, universities, city offices, and mass media, and so on, using the system like “Special Communicators for a World without Nuclear Weapons”.  Those actors have been independently tackling the problem about disarmament, telling wartime memory, etc.  What the government can do is, as Mr. Takeda said, to amplify these activities as whole.  By collecting information and connect each activity organically, the activities will be so efficient.  I have been thinking that everyone wants to somewhat take action, and that, in fact, there are many kinds of activities, but that each is so independent that they don’t have ebough power. I was impressed by the idea that the government can use the private power.

Second, I have been wondering whether being emotional telling the experience of the war works good or not.  Is being an argument based on emotion effective so as to tell the story or to improve disarmament?  Being emotional has both good and bad aspects, but, as Mr. Takeda said, the role of hibakushas may be to move others’ emotion.  After all, diplomacy is both logical and emotional.  So, hibakushas dispassionately speaking their experience is moving, which is one of the effective tools to hand stories down from generation to generation and from Japan to all over the world.

We are thinking about how to tell hibakusha stories.  I think hibakusha story is more or less sentimental.  It is true that stories won’t be common if they are too emotional and ideological.  However, being emotional and, at the same time, moving is what is needed, which is rather effective to tell the story.