Hi I’m Mizuki, a second-year student of the University of Tokyo. I’m going to write a short description of the works of my group in this article. 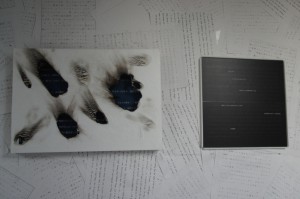 Many survivors of nuclear bombing say “it’s couldn’t be understood by a person didn’t experience.” How we should face this distance.

The upper statement is English translation of what we made as an introduction of our works when we exhibit them. This is the most important point of it and that’s all. I do not want to discuss in detail it in this article, and also I do not think I could. We can argue that this sense of impossibility was the very motive to make these works.

The work in the left named “Yakeato” is made of two form board. One is printed with an experience of a survivor and put behind, and another is put in front of the board with experience. The front board was melted by roasting and has many holes. 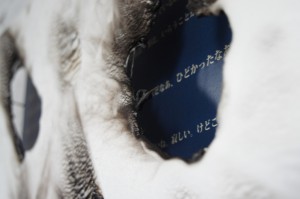 The work in the right named “Zanshi” is made of one board. It’s also printed with an experience of another survivor. However, the letters are extremely pale so that you cannot read them without coming close almost touching it.

We do not intend to insist one just explication, of cause. We want to depict the complexity and diversity which we cannot describe definitely but exist certainly.

Thank you for your reading.

Hello! I’m Mirai Tanikawa. On 5/17, we invite Mr. Yoshinori Takeda, who works in Ministry of Foreign Affairs, especially for disarmament and non-proliferation.

He spoke frankly about Japanese foreign policy and the present condition. He told us that MOFA is promoting nuclear disarmament, non-proliferation and nuclear security, by using advantages as the only atom-bombed country, ultimately for Japanese security. Although he admitted that disarmament not always results in peace, he would believe that if it’s done carefully enough, MOFA’s policy helps Japanese and the world peace.

What I can do is small, but I, as a member of this seminar, will deeply think and study about peace, nuclear weapons and atomic bomb victims, and broadcast using a sense as a student, believing that it will become a tiny power for peace.

After watching ‘Waltz with Bashir’ – the meaning of Memory

This is the animated documentary into the horrors of the 1982 Lebanon War, based on the director Ari Folman him self’s experience and the interviews from his old friends and comrades. The story begins with the scene of 26 vicious dogs chasing Ari’s one old friend. They conclude it has a connection to their Israeli Army mission invading Palestine. But unlike Ari’s friend who remembers what had happened and haunted by guilt, Ari cannot remember a thing, and he decides to meet his old friends and comrades, delving into the memory he has forgotten. Throughout the film, Ari finally gets to recall what had happened and what he had done at the Sabra and Shatila refugee camps.

So why was Ari so desperate about delving into his erased memory, maybe knowing it would be a painful one? Why was it so important to him and what is he trying to say through this film? Being curious about these, I came to rethink about the meaning of ‘MEMORY’: What does memory mean to us who has not experienced the war or massacre, and what does it mean to the people who have suffered? Why do we need to remember the pains that may even seem irrelative to us and how do we need to deal with that memory?

WAR is something like a MOVIE. In the film, there is a scene people watching the battlefield with bullets flying over and people dying out, just like the audience watching a movie. When we watch a movie, the way we interpret that movie or the most impressive scene differs depending on people. Just like that, the war is remembered in his or her own different way. Some would forget eventually, some would remember only the part they want to remember, and some would live with the distorted memory. Therefore, even though what people remember, the images they have about the battleground may be a fact, but we cannot determine it is the ‘truth’. Still, I do believe memory is something actually matters and something we should remember and share because there is something we should NOT forget in any case, the PAIN.

So, what does memory mean to us without experience? Why is it important to us? I believe it is because the memory leads us to the place where we should be. When we do not have any memory, we fill those empty spaces with a vision, but when that space is filled with facts, the stories of people suffered of suffering, we finally get to know what it was like and how cruel people can get. Therefore, memory is the point where we can try to share the tragedy and sympathize, the point we think over our history, and the point we promise ourselves that we should not repeat the same mistake ever again.

And why is it important to people with experience? The process of delving into the memory is painful and making them recall those times again might raise some ethical problems. Thus, I don’t blame people who erased their memories or people who don’t want to talk about it anymore, but I do believe, people can feel catharsis by sharing their torment together, and it can be a way to heal their pains. At some point in their lives, they may run into the situation that reminds them of the battlefield, or the moment memory haunting them back. At that point, I just want them to know that they are not alone. There are people with same or similar experience out there in the world, and people who are willing to understand their pain and trying to share it with them.

Including us, no one can change what already happened in the past. But we CAN change the future. The future is ours and we are responsible for making world without war, world with peace. When we do not look back our past, we are tend to make the same mistakes, so not to go over the same tragedy, we should learn from the past and memory, and this would be the reason why Ari was so desperate to get his lost memories back.